Here we use pinecones to get our fires started as well as getting it going a bit hotter when we have left it a bit too long without checking.  So each week several guys come around selling big bags to help stock up our inventory.  They run from 60 pesos a bag to 80 or $2.15 to $2.85 US per bag.

Right after I took this photo our guy came by and we bought two more bags of cones so our inventory is 4 full bags and 1 partial. That should take us for a few weeks when the weather turns cold again.  The past several days it has been up into the high 60’s even got up into the low 70’s so we have not had a fire going.

We had fireplaces in a few of our homes in the US. But never needed any of them for heat. They were really more ornamental – of course we lived in the south and it didn’t get very cold often and if it did, we had central heating. Here you depend upon your fireplace to heat your home.  Most homes here do not come with any type of central heat or air conditioning, ours included. 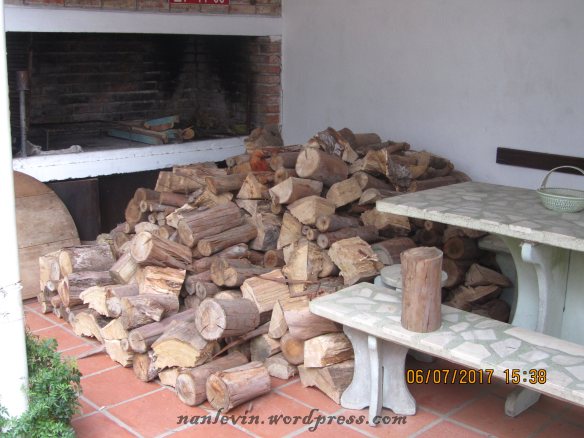 This is a little over two loads of eucalyptus wood, cost per load $160 US.  We are not into winter yet but for the past two weeks have had a fire going from 8am until 8pm every day. We are becoming pretty proficient in fire starting, it is an art form all in itself.  Our other homes had gas starters or we just used those Duraflame logs that all you need to do is light a corner of the bag and voilà, you had a fire. It was a learning curve here, we found bottled kerosene in the grocery store and used rags soaked in this to start the fire.  Then a super helpful guy at the hardware store said, “why don’t you just use a tuna can under the logs”.  We are now pros at making fires, just about 1/4 cup of kerosene in the bottom of the can, place a few smaller starter logs (which they call rollos) on the grate and set the tuna can on fire. Always learning something new. Like using pine cones, but that’s another post.

To supplement the fire we have purchased several space heaters, one is a propane gas heater below: 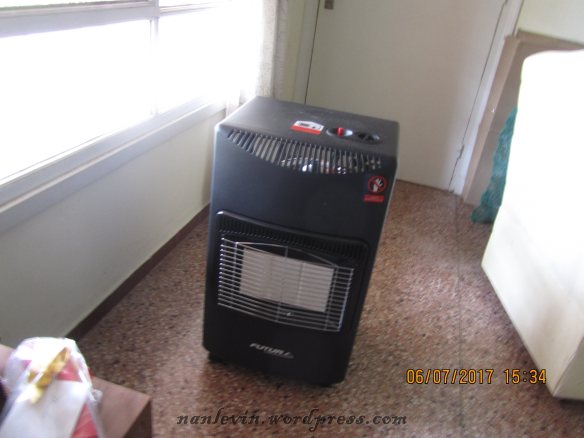 The biggest issue with this is that it puts humidity in the air and our winters are humid enough without adding more humidity. But if we run it when the fireplace is going, it seems to be fine.

Next we bought one that looks like a radiator below:

This one filled with oil that is heated by electricity, not the best for here because electricity is very expensive.

and the last is a small heater with a fan just for the bathroom:

Also, not the greatest choice due to the cost of electricity. But it can heat the bathroom in just a few minutes. Also it blows the main fuse for the house if anything much else is running at the same time.

We also bought an electric blanket that goes on the mattress underneath the sheets and it is super snugly after just a few minutes ! I even put the pillows under there to warm up.  Next I will add the pajamas……

We have not received a full months’ electric bill yet, can’t wait to see what it will be.